A downloadable game for Windows, macOS, and Linux

Our submission for the 6th Godot Wild Jam.

In this game you play as a secret cactus operative. You have to end the vile bandits plans of flooding the desert and save cactkind.

Shoot the bandits, turn off the pipes by turning valves and get to the end of each stage! Try to get the highest rank!

Game was developed by Goldenapples, Sumaris and Ekster in Godot 3.1 beta3 and Blender 2.79.

Really a nice game. Overall a great achievement for such a short time. The maps are large and interesting, the animations are nice. Apart from a few objects, all assets look really nice. The audio was fitted the overall theme.

There were a few objects that kind of stood out: the water puddles looked more like grey blobs than water. The pipes were too shiny and at first, I didn't know where to find the valve (that thing is huge). Maybe place the valve somewhere along the pipe, which would also make more sense. The pressure plates were a nice idea, though I think the implementation could be a bit different. Those metal spikes out of the ground looked kind of out of place. Maybe it could be a wooden gate that opens, or so.

The camera was another issue. Making it slowly rotate into the direction your walking would have been a better option, or even just making it mouse controlled.

I also didn't understand the rooted/uprooted functionality. Maybe you could have used that a bit more, like you can only fire when rooted or only make you able to go so far without rooting yourself again. And god is my character slow. You don't really notice it at first, but when you want to get somewhere, it really takes time. Maybe being able to sprint would be nice. Or maybe even just to jump...because watching my character walk without being able to do anything else in the time can get boring.

I also missed anything else to do on the map. Maybe let the player collect some items (ammunition, health) or a quest item, such as a wrench to turn the valve or something.

The last thing I noticed was that the AI was a bit weird at times. I think it glitched out sometimes, making them walk at an angle, or walking deeper into the ground. They also never posed any danger. They were so slow, that I could shoot them from far away. I didn't even figure out they could shoot back until the very last enemy.

I know this is a lot of negative points, but I want to point out that I am amazed by what you have delivered here. Overall, this is a working game. You have a menu, options and all transitions work. All the animations are running and all events work. I think this is really a great achievement and all my points really are some tiny tweaks here and there.

Hi Terces and thank you for your long and thoughtful review. The points you brought up will help us grow and improve as creators and they are hugely appreciated, I won't go into detail for each point since I don't feel like I can defend any of the decisions taken at this point. But thanks again, you've helped us immensely with this. 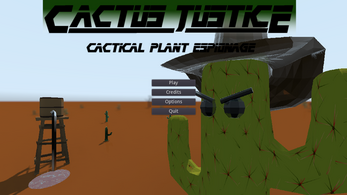 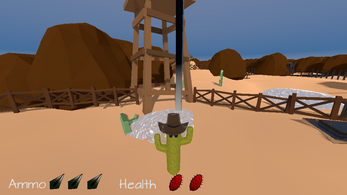 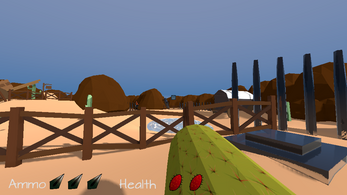 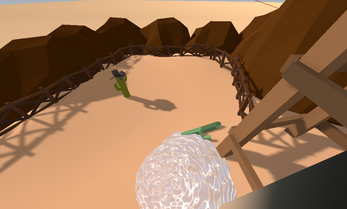